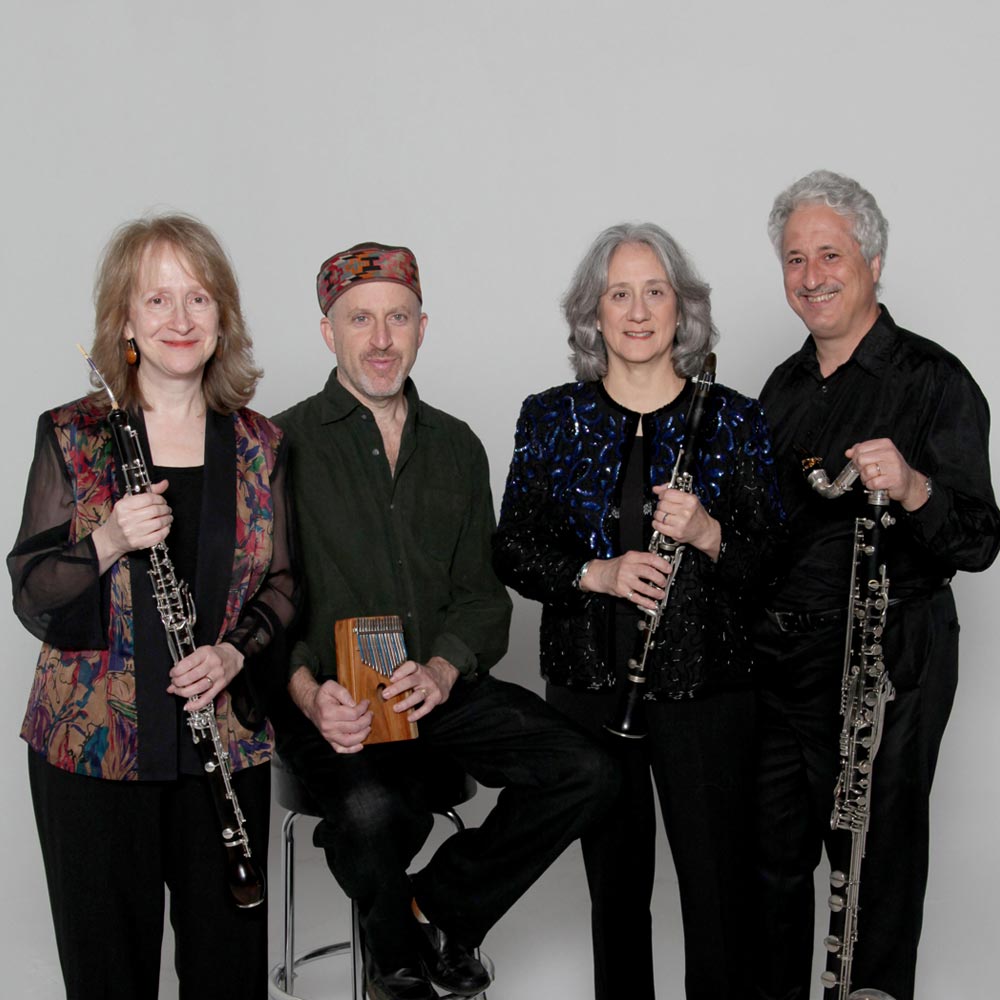 Hevreh is a Hebrew word meaning “Circle of Friends.” Friendship, relationship, connection— these make up the DNA of the HEVREH Ensemble. Formed and cultivated by a group of friends, both new and lifelong, HEVREH Ensemble is the best kind of chamber group— their “clean, tight, creative… aesthetic that defies description” (Audiophile Audition) makes it abundantly clear that this is a group of people who know each other well and who work intensely and closely together.

Rather than genre-defying, HEVREH’s sound is genre-connecting— “Jazz-meets-World; Jazz-meets-Classical; World-influenced-Classical” (Audiophile Audition). Member and composer Jeff Adler makes colorful use of a rich and varied palette of instrumentation and compositional styles, all drawn from deeply personal sources for group members and their guest artists. All four members of the group are classically trained musicians (Juilliard School of Music, Manhattan School of Music, Jerusalem Academy) who are also of Jewish heritage – no surprise after hearing the delightful and driving rhythms of some of the melodies, clearly drawn from the Jewish folk traditions of Eastern Europe. Adler’s long-time relationships with Native American flute-makers and performers Hawk Littlejohn (Cherokee) and Daniel Bigay (Echota Cherokee) led to the introduction of Cherokee flutes into Adler’s compositions, and eventually a collaboration with Cheyenne flutist Joseph Firecrow on HEVREH’s second album. Yet HEVREH’s music cannot be defined as “Jewish folk” or “Native American,” the generic “World” or even “fusion.” HEVREH’s essence is the thread of connection that runs through Lost Tribes, which opens with a Cherokee flute and closes with a shofar. HEVREH’s aesthetic is the double-image evoked by the piece’s title and the intertwining of the distinct musical traditions of these two diasporas, delivered with the respect of exacting classical technique, the playful joy of jazz improvisation, and the intense warmth, humor, and empathy that only a close-knit chamber ensemble can offer. HEVREH is the gathering-in of specific and studied musical traditions, woven together by an open-hearted desire to find and express connection with other musicians, musical languages, and music-lovers, ever widening and strengthening their “circle of friends.” On their newest album, HEVREH welcomes tabla player Naren Budhakar, percussionist Shane Shanahan (Silk Road Ensemble), and bassist Jennifer Vincent, all of whom bring their own traditions and experiences of cross-genre connection to further expand the circle.

The Hevreh Ensemble has come together from many places— together with their wonderful audiences and listeners, they have truly become a circle of friends. The members of the group trained at the Juilliard and Manhattan Schools of Music, SUNY Stonybrook, Brooklyn College, and the Jerusalem Conservatory in Israel— institutions that inspired their passions for music education and engagement with their audiences. Hevreh Ensemble members have been fortunate throughout their careers, friendships, and travels to have the opportunity to explore many different areas of music, including jazz, composition, conducting, and many musical traditions from around the world.

Judith Dansker and Laurie Friedman have been lifelong friends and colleagues, meeting as music students at the Manhattan School of Music. They were founding members of the Galliard Woodwind Quintet, which garnered critical acclaim for their performances at the Frick Museum, Carnegie Recital Hall and the Library of Congress.

Adam Morrisson moved from New York City to Israel when he was in high school, and attended music school in Jerusalem. He furthered his studies in Composition and Jazz at the California Institute of the Arts.

Jeff Adler is an active performer in the orchestras of Broadway musicals, including The Lion King, Les Miserables, and Mary Poppins. Through one of his pit band colleagues, he was introduced to Hawk Littlejohn, a Cherokee Medicine Man and flute maker. Hawk was a mentor to Jeff as he began to incorporate Cherokee flutes into his performance and compositions, and introduced him to a circle of friends and colleagues including Jeff’s flute-maker, Daniel Bigay.

Since 2004, audiences around the world have embraced their unique and spiritually uplifting sound. Their overseas tours have been the spark for new relationships, both personal and professional, and the catalyst for life-changing experiences. They performed at the stunningly beautiful Spanish and Jerusalem Synagogues in Prague and at the magnificent Church of St. Stephen in Vienna. In Germany, they were met by a huge, warm crowd at a concert in Bonn, sponsored by the Society for Jewish-Christian Collaboration. Most recently, they performed for the International Jewish Cultural Festival in Krakow and for the POLIN Museum of Jewish History in Warsaw. Before the pandemic, the group was scheduled to present a tour to China sponsored by PARMA Recordings and also were set to embark on a tour to Argentina, which will be rescheduled! 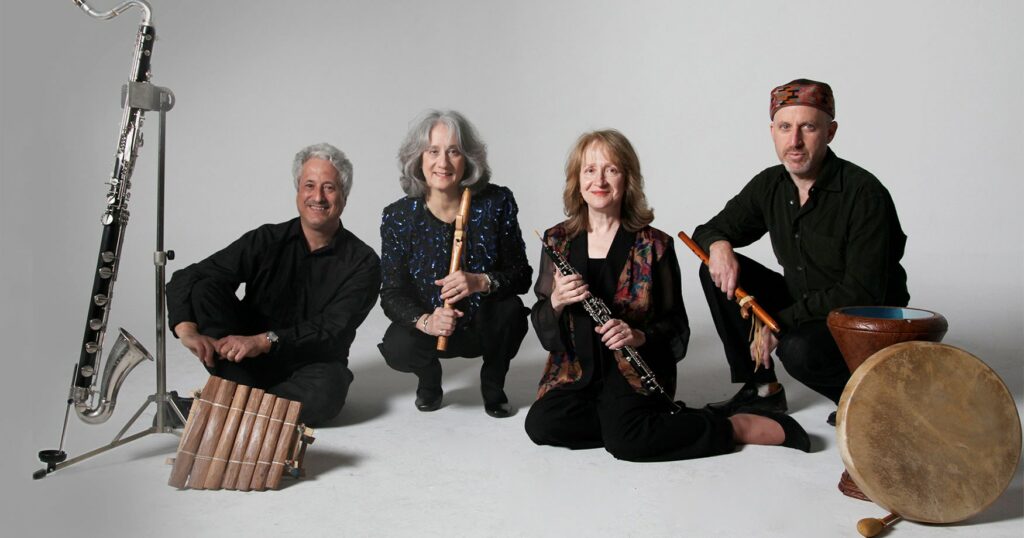 Composer Conversations: Hevreh Ensemble and A PATH OF LIGHT 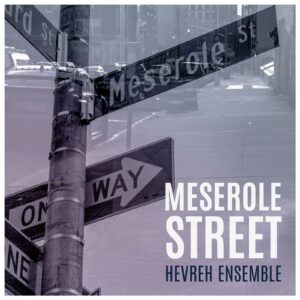 Release Date: November 11, 2022
Catalog Number: AR0018
21st Century
Jazz
Clarinet
Flute
Keyboard
Formed from long standing friendships and mutual musical interests, whose distinctive sound has been embraced internationally, the Hevreh Ensemble returns with MESEROLE STREET, a collection of works from composer and ensemble member Jeff Adler. With music inspired by friends and family, nostalgia, and several compositions influenced by the 2020 pandemic, the ensemble employs a variety of instruments both common and unique, namely the Native American flute and the shofar horn. From the cold feelings of isolation in Alone to the resounding emotions of hope in Freedom Day and more in between, the Hevreh Ensemble’s close-knit relationship and signature sound once again proves their notion: “good friendship makes for good music, and great stories.”
Discover 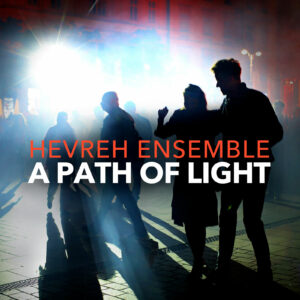 A Path of Light

Release Date: May 24, 2019
Catalog Number: AR0013
21st Century
Jazz
Clarinet
Flute
Keyboard
The quartet of musicians who comprise Hevreh Ensemble – Judith Dansker, Laurie Friedman, Adam Morrison, and Jeff Adler – are making their Ansonica debut with A PATH OF LIGHT. Hevreh Ensemble is internationally acclaimed for its live performances, which feature a wide array of instruments from Cherokee Native American flute, English horn, and shofar to world percussion including djembe, dumbek, balafon, rain stick, and tabla. The Ensemble is also joined on A PATH OF LIGHT by some extraordinary guests, including the genre-defying string quartet ETHEL, cross-cultural percussionist Shane Shanahan, George Rush on double bass, and Naren Budhkar on tabla.
Discover