Maltese-born flutist Fiorella Camilleri started playing the flute at age 14. Since then she has been an active chamber musician with different ensembles playing repertoire ranging from the classical to the contemporary, performing in Italy, Malta, and Japan respectively. Her latest chamber music achievement led her to Shizuoka and Tokyo, where she led a research project supported by the Malta Arts Fund. This project, which took place in 2017, involved merging Maltese and Japanese traditional music. She explores the subject of international cultural diplomacy through chamber music and research based projects.

Camilleri continues her education by participating in masterclasses with principal orchestra players, most recently with Emily Beynon, Paul Edmond Davies, Andreas Blau, and Nicola Mazzanti. Camilleri was chosen as an active participant artist at the Aurora International Music Festival in Sweden (2018). In April 2012, she finished a two-year master’s degree, “Biennio Specialistico,” in Flute performance at the Istituto Pareggiato Orazio Vecchi Tonelli in Modena, under the guidance of Michele Marasco, Andrea Oliva, and Gabriele Betti.

Camilleri was the winner of the Young Musician Award (2007), which enabled her to attend masterclasses at the Thames Valley University, London College of Music, with flutist Christine Hankin. Furthermore, she holds both the associate and the licenciate Trinity College diplomas (2006-2007). For the past 14 years, Camilleri has been holding the sub principal flute/piccolo chair with the Malta Philharmonic Orchestra. Camilleri plays on a 14K Muramatsu flute and on a Philip Hammig granadilla wooden piccolo.

In addition to her music career Camilleri holds a Bachelor of Arts (Hons) degree in International Relations from the University of Malta (2004). www.fiorellacamilleri.com 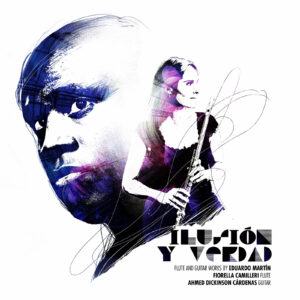 Release Date: March 11, 2022
Catalog Number: AR0017
21st Century
Chamber
Flute
Guitar
ILUSIÓN Y VERDAD from Cuban guitarist Ahmed Dickinson Cárdenas and Maltese flutist Fiorella Camilleri is a vibrant collection of works for guitar and flute. The music incorporates not only the infectious Afro-Cuban rhythms for which Cárdenas is known, but also features elements of blues and rock, among others. Works like Hasta Alicia Baila and Sones Y Flores are especially inspired by the diverse history of Cuban music and its relationship to jazz and western classical music. Throughout the album, Cárdenas and Camilleri exhibit their ability to transcend genre limitations with ease, creating new and fascinating cross-cultural musical connections. Even still, Cárdenas’s performances reveal him to be a proud ambassador for his country’s music. Lauded by Classic FM Magazine as a “true pioneer,” Cárdenas upholds this title with ILUSIÓN Y VERDAD.
Discover